It pays to know the distinguishing features of electrolytic, film, and super capacitors when planning applications where energy efficiency is important. RENEWABLE ENERGY SYSTEMS all have a common need for high-efficiency power circuits. Whether the original source of energy is light, heat, or mechanical motion, ancillary circuitry will probably either store energy, convert it from dc to ac or vice versa, or even from one level of dc to another. Capacitors are a common ingredient in all of those scenarios.

Capacitors are one of those components that engineers often take for granted. Unlike integrated circuits or power semiconductors, their technology hasn’t changed radically every few years. That said, capacitors have been steadily evolving to perform better and last longer. And some of the newer technologies, such as supercapacitors (also called double-layer capacitors) have become much less expensive in recent years, making them affordable in more applications than ever. A simplified supercap-based energy harvesting circuit, while not a practical complete system, illustrates the concept. On the far left, the input voltage could originate from a PV cell, a piezoelectric device or other mechanical energy conversion device. The supercap C1 stores energy. Diode D1 prevents stored supercap energy from being fed back to the source. Before connecting to the load, some type of over-voltage protection is needed. In a practical application, additional circuitry is needed to more efficiently capture and regulate the power.

Green energy power sources are usually thought to be designed as low-maintenance systems because they are often off-grid resources, in remote locations. Because of the demands placed on these circuits, and the difficulty of performing field service, component reliability is even more important than in mainstream applications.

Photovoltaic (PV) cell arrays represent the most common type of solar power generation. The cells produce power by pulling or “knocking” electrons loose from absorbed solar energy, to create an electron flow that is captured as dc current. The dc power is converted to ac via inverters. The inverter technology may be in the form of either a single microinverter connected to each solar panel or a string inverter, which converts the accumulated power of multiple solar panels, wired in a series configuration. Within each inverter, film capacitors or long-life electrolytics find use in the dc link, snubber and ac output filters.

One of the fastest growing sectors of the PV solar market is “off-grid power.” Off-grid power setups are entirely self-sufficient solar-powered supplies for lighting, remote monitoring and other applications. For example, a remote parking lot can be lit by high-efficiency LED lights and powered by solar without any connection to a power grid. This application usually employs microinverters.

Another type of solar power generation is a solar furnace, which concentrates sunlight on a focal point. Temperatures at that focal point can reach 3,500°C and provide a means to power a steam–powered ac generator, as in a conventional power plant. To operate the solar furnace at maximum efficiency, the mirrors that redirect the sunlight must constantly be repositioned. Electric motors, powered by rechargeable batteries or supercapacitors, handle the repositioning. A key benefit of solar furnace technology is that its use of time-tested steam power generators makes it safe and clean – it releases no pollutants, even in a disaster.

France is home to the largest solar furnace power station at Odeillo. It covers about 2,000 m2. Most are considerably smaller.

Wind turbines have a pitch system that adjusts the angle of the props depending on wind conditions. The pitch-control system may be hydraulic or electric though the majority are electric. Here, electric motors powered by batteries
or supercapacitor modules alter the
pitch angle.

With capacitance to 470 F, Illinois Capacitor’s DGH Series is part of a new wave of lower-priced supercapacitors.

Unlike batteries, supercapacitors don’t degrade much with each charge/discharge cycle. A significant additional benefit is that they should last two to four times longer than battery packs, reducing long-term service costs. Supercapacitor arrays are already in use by major wind power manufacturers, demonstrating the attractiveness of this approach.

Remote monitoring systems, such as IoT devices that transmit complex data or simple on/off detection, all require reliable sources of power under varying conditions. Here, energy harvesting transducers often serve as primary or secondary power sources. Examples include vibration sensors, piezoelectric transducers, small wind turbines or small PV cells. Supercaps can be an excellent way to store energy for these applications. The ability of a supercap to quickly supply a burst of power makes them good candidates for remote sensors. In such circuits, supercapacitors may be the sole power source or supplement a battery when the remote sensor burst-transmits data back to a monitoring station.

Power Film Capacitors are a specialized family of film capacitors intended primarily for high voltage, high-current applications, such as dc-links and power semiconductor snubbers. They are especially well suited for the types of high-frequency inverters used in green energy power conversion. Power film capacitors can provide high reliability and long life. That said, high-performance power applications are characterized by harmonics, irregular signals, complex waveforms and continuously changing signal levels. These conditions — along with working voltage, operating frequency and temperature, and ESR –are considerations when selecting power film capacitors because ignoring them can lead to greatly shortened device life. Snubber capacitors are specialized types of film capacitors placed across semiconductor devices for protection and to improve circuit performance. In high-power modules, the voltage across the power semi can exceed the dc bus voltage. When this happens, the snubber capacitor absorbs the excess energy.

Snubbers can reduce or eliminate voltage or current spikes from high-speed switching, limit dI/dt or dV/dt, shape the load line to keep it within the safe operating area (SOA), and transfer power dissipation from the switching device to a resistor or a useful load. (Only the capacitor is needed in some applications.) They can also reduce both total losses due to switching and EMI by damping voltage and current ringing.

Depending on the circuit configuration, a snubber capacitor may mount directly onto the output terminals of a power semiconductor or PCB mount.

As is widely known, supercapacitors have incredibly high energy density as compared with other types. While individual devices have single-digit voltage ratings, supercaps can be banked to make up modules for virtually any required voltage. In energy storage applications, their most significant advantage over batteries is their ability to be charged and discharged continuously without losing capacity.

Supercapacitors may serve either as solo energy storage devices or be connected in parallel with batteries. In the latter application, supercapacitors respond quickly when energy bursts are required. Unlike batteries, they can charge and discharge fast while batteries are better at supplying bulk energy for longer periods. 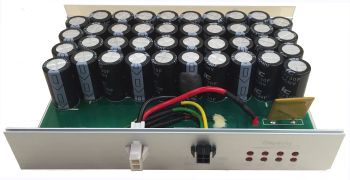 Supercapacitors have a construction that differs drastically from that of other capacitors. Supercaps are generally based on carbon (nanotube) technology. The design creates a large surface area with an extremely small separation distance between layers. Conventional capacitors have two metal electrodes separated by a dielectric material. In contrast, supercaps separate the electrodes with a physical barrier made from activated carbon. When an electrical charge is applied to the material, a double-electric field is generated which acts like a dielectric. The thickness of the electric double layer can be as thin as the diameter of a molecule. As a result, the surface area of the activated-carbon layer is extremely large, several thousands of square meters per gram. So, in concept, it behaves like a capacitor that has a physical size many times larger.

Individual supercaps can be found in small energy harvesting applications; modules are generally required for larger applications that involve conventional ac line voltages. The construction of these modules requires balancing circuitry, to keep the voltage across each cell approximately equal, and may also include protection devices. When a supercapacitor has no stored charge, it “looks like” a dead short to a charging device. Fortunately, PV cells are not bothered by this condition. Other charging circuits must be designed to meet that challenge.

Electrolytics are a good fit for many renewable energy inverter applications. With much higher power density than film caps, they can be a good choice in circuits below 600 Vdc. Inverters typically require high capacitance to handle peak load requirements that electrolytics handle well.

Electrolytics generally cost less than film capacitors and have higher capacitance for their size but are not available for bus levels exceeding 550 Vdc. Circuits with levels above this would need aluminum electrolytic capacitors placed in series which reduces the capacitance. Their higher voltage ratings often make power film capacitors more economical when bus voltages exceed 550 Vdc. While electrolytics are typically thought of as having a much shorter lifespan than film caps, proper selection can yield a life roughly equal to the expected life of the inverter. Also, the latest electrolytics offer lower ESR and longer life. (To see how the life of any electrolytic can be greatly extended by derating, experiment with Illinois Capacitor’s life calculator. Both electrolytics and film capacitors can be used to filter out noise generated within switching power supply circuitry and to keep out external conducted noise.

All in all, it’s good to be aware of the options available for converting and storing green energy. The right capacitors will yield greater efficiencies and longer device life.