There have been many great battles between technologies over history, some obvious, others not so much. Mostly the disruptive event of change comes from solutions migration, as new methods are developed to address applications that are superior to legacy solutions. Another major source of societal shift is the development of new application spaces enabled by new technologies.

Sometimes the transition is abrupt to the point it almost looks like a cooperative effort of the people. When flat panel TV sets hit the magic price tipping point, you could literally walk down any street in the U.S. and pick up a fully functional CRT-based set for free, as people threw them away without a second thought. Yet some are more emotionally driven, like the people who hoarded (some still) incandescent bulbs during the transition to LED-based systems.

One of the more bitter arguments in technology transition encompasses both cases, and that is in automotive. On the one hand, there is a fight (more a retrograde combat action) between fossil-fueled vehicles and electric, representing new tech for an old application. On the other hand, you have autonomous driving systems, exposing a new application space enabled by advanced core systems.

There is some very hot debate occurring over both the future motive force under the hood, and the need (or societal viability) of self-driving cars. While there is a lot of emotion in the discussion, the outcome is more a case of when than if. One of the reasons for this is that the technologies involved are still maturing and developing.

The biggest developments supporting the migration toward the completely electronic car are in the area of DC/DC power conversion. Although a great amount of attention is being paid to the battery—its size and capacity—the greatest advances in electric vehicles will come from significant reductions in the power system’s size and weight, with equally major advances in energy efficiency.

This is resulting in automotive systems starting to resemble industrial power systems, especially as the industry moves toward a 48 V power bus. Advanced DC/DC systems are also needed, because of the growth of power-hungry electronic systems, feeding an increasing demand for functionality and features in the latest cars. Features like electric start-stop, drive-by-wire, electric suspension, and other demands, the future of the car will be determined more by the quality of its DC/DC power conversion systems than by how big its battery is.

This pressure on the power infrastructure increases when you consider the emergence of autonomous vehicles, with their additional demands on power from systems such as lidar, radar, and the suite of cameras and ultrasonic sensors required. Add to that the high-performance graphic processors and logic systems needed to gather, interpret, integrate, and act. Advanced processors need a lot of power, and put an additional energy budget burden on the power system, something a traditional automotive 12 V electrical distribution bus has trouble addressing. 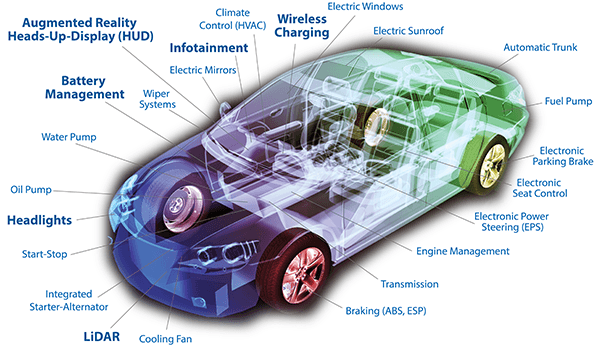