Sometimes energy for IoT devices comes from the likes of thermoelectric generators and thermopiles thanks to power management ICs that double as energy misers.

Power consumption is a controversial topic when it comes to IoT devices. At the low end of the power spectrum are devices where most of the power consumed goes into the LDO (low dropout) regulator rather than into the functions of the device itself. Some wearable devices fall into this category. The power conversion ICs that handle these applications can be dealing with tens of microwatts and nanoamps of current.

The situation is similar for energy harvesting (EH) technologies as used to scavenge vibration energy and sunlight for wearables. Power levels can be on the order of milliwatts under typical operating conditions. It might seem as though it would be tough to operate for long with such low power levels. But harvesting elements, such as wireless sensor nodes (WSNs), can gather enough energy to provide power broadly comparable to what’s available from long-life primary batteries, in terms of both the amount of energy provided and the cost per energy unit provided.

Although primary batteries claim to have 10-year life spans, their useful life greatly depends on both the level of power extracted and the frequency with which it is withdrawn. Systems incorporating EH can typically recharge after depletion, something systems powered by primary batteries cannot do. Nevertheless, most implementations will use ambient energy as the primary power source, supplemented by a primary battery that can be switched in if need be. This capability can give the system a long life—approaching that of the battery, usually about 12 years for lithium thionyl chloride chemistry.

Of course, the energy provided by the EH source depends on how long the source is in operation. Therefore, the primary metric for comparing scavenged sources is power density, not energy density. EH is generally subject to low, variable and unpredictable levels of available power. So most implementations use a hybrid structure that includes the harvester and a secondary power source. The secondary source could be a re-chargeable battery or a storage capacitor. The harvester is the energy source while a battery or a capacitor supplies power when required, but otherwise charges up from the harvester. Thus the secondary energy reservoir supplies power when the ambient energy is not available for some reason.

One of the more interesting energy harvesting applications is wearable electronics. Although this area is sometimes equated with the FitBit, Google Glass and Apple Watch, wearable technology is not just for humans. Recent examples include ultrasound-delivering treatment patches and electronic saddle optimization for horses, as well as collars that track and identify animals.

Fabrics that can generate electricity from solar sources are advancing. One organization at the forefront of such research is the European Union-funded project Dephotex, which has developed methods to make photovoltaic material light and flexible enough to be worn. The group has devised prototype demos for applications that include jackets, pillows, car dashboards for charging iPhones, and larger surfaces like curtains or coverings able to get electricity for lighting or warming. 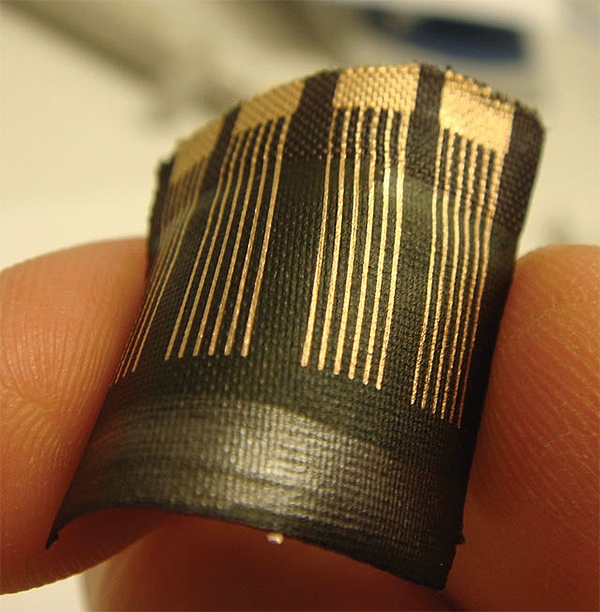 A Dephotex sample textile containing photovoltaics. The European group is devising photovoltaic textiles that can serve in applications such as curtains or coverings.

An obvious application for IoT is health monitoring. The hope is that bio-stats from items such as smart watches will lead to lifestyle and behavior modifications. EH sensors may also find use in exoskeletons to facilitate mobility for paraplegics. But, from power conversion IC standpoint, partitioning and efficiently powering these types of wearables is not trivial.

Practical power conversion
Linear Technology has developed several power conversion ICs having the necessary features and performance to enable the kind of low-level harvested power that is useful in IoT. The LTC3107 is a highly integrated dc-to-dc converter designed to extend the life of a primary battery by harvesting and managing surplus energy from extremely low input voltage sources, such as TEGs (thermoelectric generators) and thermopiles. The chip generates an output voltage that tracks that of the existing primary battery. The LTC3107, along with a small source of thermal energy, can extend battery life, in some cases up to the shelf life of the battery.

The LTC3107 dc-to-dc converter can extend the life of a primary battery by harvesting and managing surplus energy from extremely low input voltage sources, such as TEGs (thermoelectric generators) and thermopiles.

Another example is the LTC3331, which delivers up to 50 mA of continuous output current to extend battery life when harvestable energy is available. When powering a load with harvested energy, it requires no supply current from the battery. It pulls only 950 nA when operating from the battery under no-load conditions. The chip integrates a high-voltage EH power supply with a synchronous buck-boost dc-to-dc converter. When paired with a rechargeable primary cell, it creates a single non-interruptible output for EH applications such as WSNs and IoT devices.

The LTC3331 EH power supply consists of a full-wave bridge rectifier accommodating ac or dc inputs and a high-efficiency synchronous buck converter. It harvests energy from piezoelectric, solar or magnetic sources. A 10-mA shunt enables simple charging of the battery with harvested energy, while a low battery disconnect function protects the battery from deep discharge.

The rechargeable battery powers a synchronous buck-boost converter that operates from 1.8 to 5.5 V at its input and is used when harvested energy is not available to regulate the output whether the input is above, below or equal to the output. The LTC3331 will only charge the battery when the energy harvested supply has excess energy. Without this logical function, the energy harvested source would get stuck at startup at some non-optimal operating point and would not be able to power the intended application through its startup. The LTC3331 automatically transitions to the battery when the harvesting source is no longer available. This lets the battery-operated WSN extend its operating life from 10 to more than 20 years if a suitable EH power source is available at least half of the time, and even longer if the EH source is more prevalent. 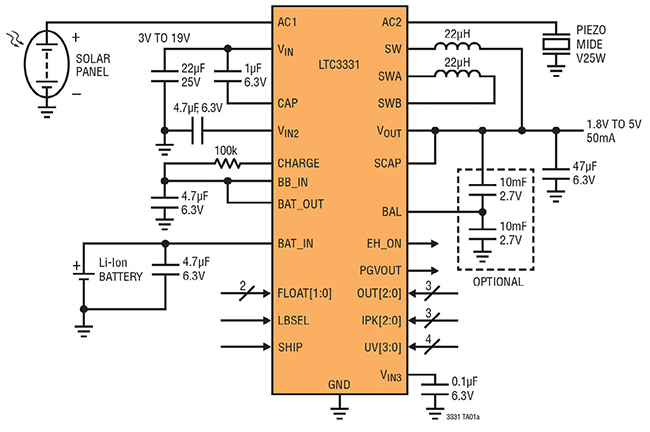 Finally, the LTC3335 nanopower buck-boost dc-to-dc converter, with an integrated coulomb counter, targets wireless sensor networks and general-purpose energy harvesting applications. It is a high-efficiency, low quiescent current (680 nA) converter. Its integrated coulomb counter monitors accumulated battery discharge in long-term battery powered applications. This counter stores the accumulated battery discharge in an internal register accessible with an I2C interface. The buck-boost converter can operate down to 1.8 V on its input and provides eight pin-selectable output voltages with up to 50 mA of output current. To accommodate a wide range of battery types and sizes, the peak input current can be selected from as low as 5 mA to as high as 250 mA, and the full-scale coulomb counter has a programmable range of 32,768:1.