Environmentally friendly building trends have boosted the popularity of window coatings that keep heating and cooling costs down by blocking out unneeded parts of sunlight. They have also inspired scientists and engineers to create thin, see-through solar cells to turn windows into miniature electricity generators. Researchers in China have gone a step further and combined these two functions into one window-compatible material that could double the energy efficiency of an average household. Their work appears July 3 in the journal Joule.

“Building-integrated photovoltaics are a great example of a market where silicon photovoltaics, despite their cheapness and performance, are not the most appropriate due to their dull appearance and heaviness,” says senior author Hin-Lap Yip, a professor of materials science and engineering at the South China University of Technology. “Instead, we can make organic photovoltaics into semi-transparent, lightweight, and colorful films that are perfect for turning windows into electricity generators and heat insulators.”

To construct a prototype capable of simultaneously outputting electricity and preventing excessive heating, the researchers—who were additionally led by Fei Huang, also a South China University of Technology materials science professor—needed to perform a three-way balancing act between harvesting light for electricity generation, blocking it for heat insulation, and transmitting it as a window normally would. Mixing and matching from among materials and chemical compounds previously proposed for these different purposes, they put together a device that let the familiar visible portions of sunlight through, turned back the infrared light (a major heating culprit), and converted the near-infrared region in-between into an electric current.

Back-of-the-envelope calculations suggest that in theory, installing windows outfitted with dual electricity-generating and heat-insulating properties could cut an average household’s reliance on external electric sources by over 50%. Although that estimate assumes that every square inch of every window would be panelled with multifunctional solar cells, it only requires a slight uptick in power-conversion performance from the 6.5% figure realized by Yip, Huang, and their colleagues. “For this demonstration, we are not even using the best organic photovoltaics that are out there in this field. Their efficiency is improving rapidly, and we expect to be able to continuously improve the performance of this unified solar-cell window film,” says Yip.

These dual-function materials are still very much in their infancy, but the authors expect them to pave the way to new beneficial technologies. “Making heat-insulating multifunctional semitransparent polymer solar cells is just the beginning of exploring new applications of organic photovoltaics,” Yip says. “A version tailored for self-powered greenhouses is only one of many impactful products that we want to develop for the future.” 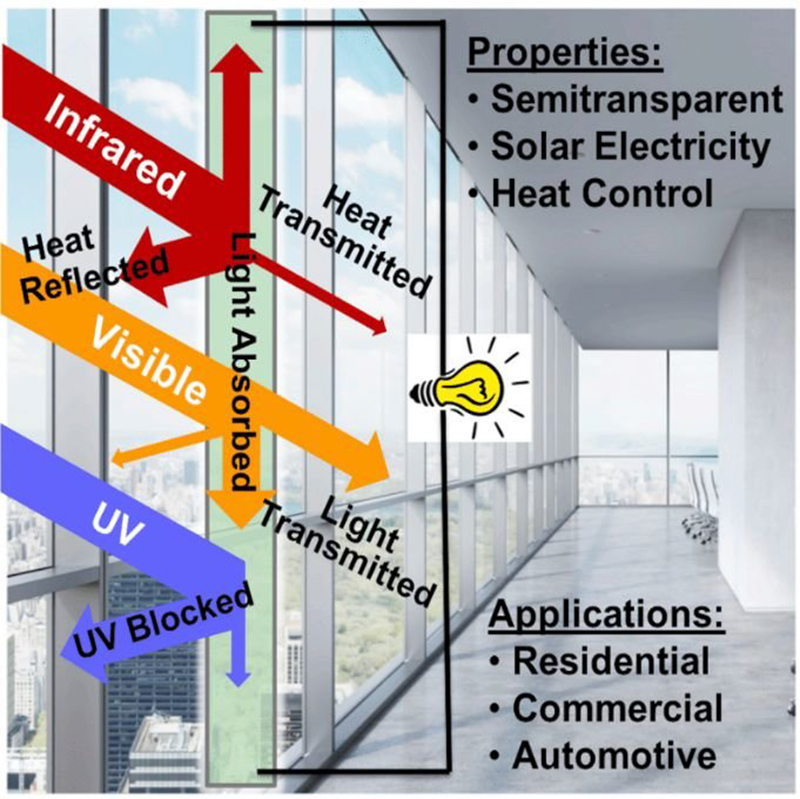