When NASA’s Mars Pathfinder touched down in 1997, it had five cameras: two on a mast that popped up from the lander, and three on NASA’s first rover, Sojourner.

Since then, camera technology has taken a quantum leap. Photo sensors that were improved by the space program have become commercially ubiquitous. Cameras have shrunk in size, increased in quality and are now carried in every cellphone and laptop.

That same evolution has returned to space. NASA’s Mars 2020 mission will have more “eyes” than any rover before it: a grand total of 23, to create sweeping panoramas, reveal obstacles, study the atmosphere, and assist science instruments. They will provide dramatic views during the rover’s descent to Mars and be the first to capture images of a parachute as it opens on another planet. There will even be a camera inside the rover’s body, which will study samples as they’re stored and left on the surface for collection by a future mission.

All these cameras will be incorporated as the Mars 2020 rover is built at NASA’s Jet Propulsion Laboratory in Pasadena, California. They represent a steady progression since Pathfinder: after that mission, the Spirit and Opportunity rovers were designed with 10 cameras each, including on their landers; Mars Science Laboratory’s Curiosity rover has 17.

That advantage represents a full circle of development, from NASA to the private sector and back. In the 1980s, JPL developed active-pixel sensors that used less power than earlier digital camera technology. These sensors were later commercialized by the Photobit Corporation, founded by former JPL researcher Eric Fossum, now at Dartmouth College, Hanover, New Hampshire.

The cameras on 2020 will include more color and 3-D imaging than on Curiosity, said Jim Bell of Arizona State University, Tempe, principal investigator for 2020’s Mastcam-Z. The “Z” stands for “zoom,” which will be added to an improved version of Curiosity’s high-definition Mastcam, the rover’s main eyes.

Mastcam-Z’s stereoscopic cameras can support more 3-D images, which are ideal for examining geologic features and scouting potential samples from long distances away. Features like erosion and soil textures can be spotted at the length of a soccer field. Documenting details like these is important: They could reveal geologic clues and serve as “field notes” to contextualize samples for future scientists.

“Routinely using 3-D images at high resolution could pay off in a big way,” Bell said. “They’re useful for both long-range and near-field science targets.”

The Spirit, Opportunity and Curiosity rovers were all designed with engineering cameras for planning drives (Navcams) and avoiding hazards (Hazcams). These produced 1-megapixel images in black and white.

On the new rover, the engineering cameras have been upgraded to acquire high-resolution, 20-megapixel color images.

Their lenses will also have a wider field of view. That’s critical for the 2020 mission, which will try to maximize the time spent doing science and collecting samples.

“Our previous Navcams would snap multiple pictures and stitch them together,” said Colin McKinney of JPL, product delivery manager for the new engineering cameras. “With the wider field of view, we get the same perspective in one shot.”

That means less time spent panning, snapping pictures and stitching. The cameras are also able to reduce motion blur, so they can take photos while the rover is on the move.

A Data Link to Mars

There’s a challenge in all this upgrading: It means beaming more data through space.

“The limiting factor in most imaging systems is the telecommunications link,” Maki said. “Cameras are capable of acquiring much more data than can be sent back to Earth.”

To address that problem, rover cameras have gotten “smarter” over time — especially regarding compression.

On Spirit and Opportunity, the compression was done using the onboard computer; on Curiosity, much of it was done using electronics built into the camera. That allows for more 3-D imaging, color, and even high-speed video.

NASA has also gotten better at using orbiting spacecraft as data relays. That concept was pioneered for rover missions with Spirit and Opportunity. The idea of using relays started as an experiment with NASA’s Mars Odyssey orbiter, Bell said.

“We were expecting to do that mission on just tens of megabits each Mars day, or sol,” he said. “When we got that first Odyssey overflight, and we had about 100 megabits per sol, we realized it was a whole new ballgame.”

NASA plans to use existing spacecraft already in orbit at Mars — the Mars Reconnaissance Orbiter, MAVEN, and the European Space Agency’s Trace Gas Orbiter — as relays for the Mars 2020 mission, which will support the cameras during the rover’s first two years. 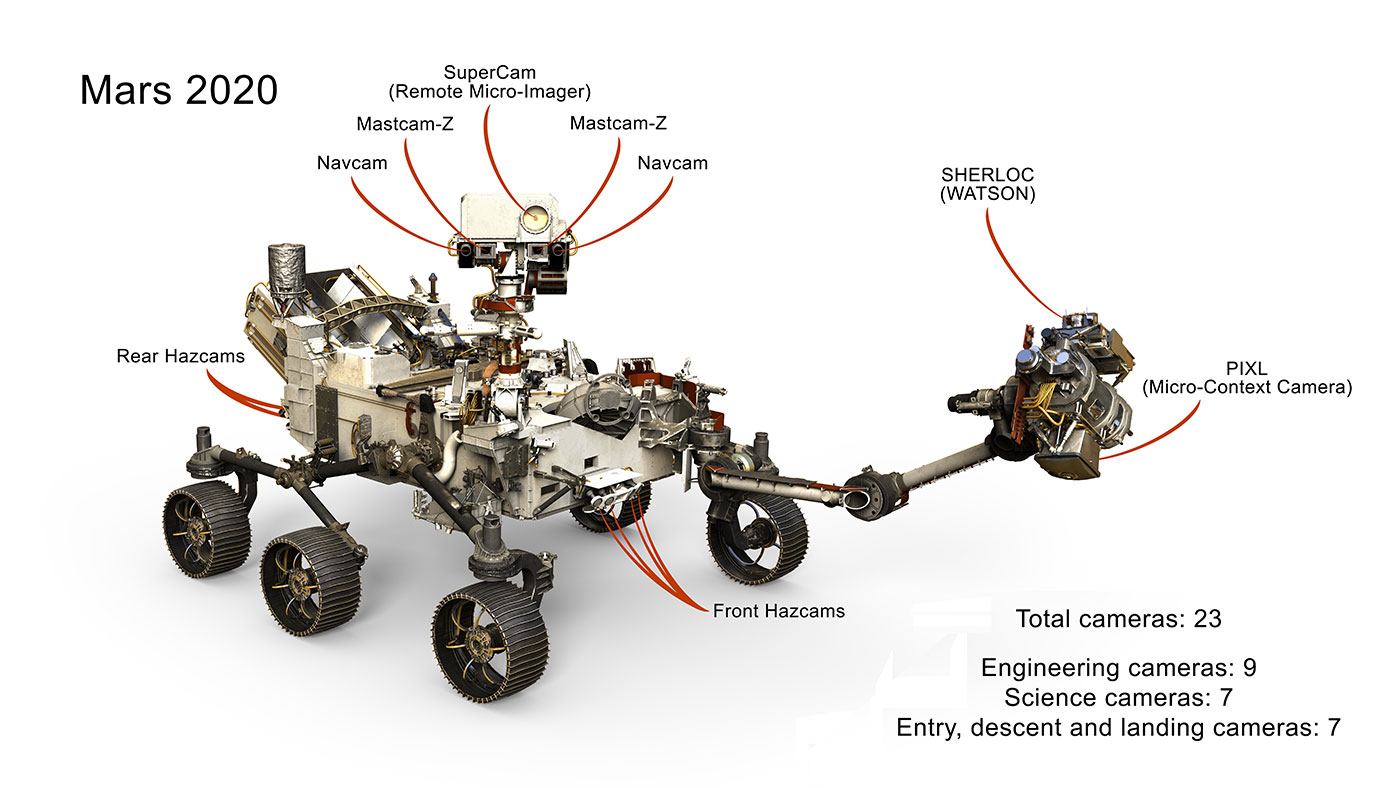