China Telecom’s Qi Bi told optical engineers how 5G will change their lives, and ours. 5G is more than wireless. Included in the 5G chain is fiber, lots of it. After all, how will all those mmWave small cells connect to the wired network? Thus, 5G should keep optical engineers busy for years, but only if it reaches full-scale deployment. At 5GTW, we’ve heard that wireless carriers need the revenue from businesses and consumers to build the new network.

That was one of the messages optical engineers heard from Qi Bi, the chief expert of China Telecom and CTO of Beijing Research Institute, on March 10 at the 2020 Optical Fiber Communications (OFC) Conference in San Diego. Bi provided an overview of 5G, what it will do, and issues that stand it its way.

Bi explained how 5G has three main applications (use cases): enhanced Mobile broadband (eMBB); ultra-reliable low-latency communications (URLLC) and massive machine-to-machine (mMTM). Of course, only eMBB is specified and under construction. The others will come in future 3GPP releases and will be built upon eMBB (Figure 1). Bi noted that the buildout for eMBB is very expensive. Carriers will need new revenue to support URLLC and mMTM, making 5G three sets of hardware. That new revenue is, according to Bi, not certain. As Clif Holliday has stated in his report, 5G must take the traffic from 5G to keep up with demand, but questions if consumers will pay for higher data rates or better coverage.

Qi proposed a solution that might work in China: Collaboration over competition. He noted that Chinses wireless carriers should work together to build the infrastructure needed to support URLLC and mMTM, the use cases with the potential to change manufacturing, transportation, and many other businesses. “Operators are looking to collaboration rather than competition,” Qi said. Can you imagine that happening in the U.S. or Europe? I can’t. Figure 2. 3GPP Release 16 adds FDD, which enables URLLC and the lower latency that comes with it. Image: OFC Conference

Even with the two additional use cases, Bi questions if IoT devices will use 5G. In Figure 3, Bi explained that IoT devices need solid wireless coverage, low cost, and long battery life. He claims that IoT won’t be able to use mmWave frequencies because of its weak coverage caused by path attenuation. Thus, IoT will need to use sub-6 GHz frequencies. Given that many IoT devices won’t need the high bandwidth available at mmWave, it might not be a problem. 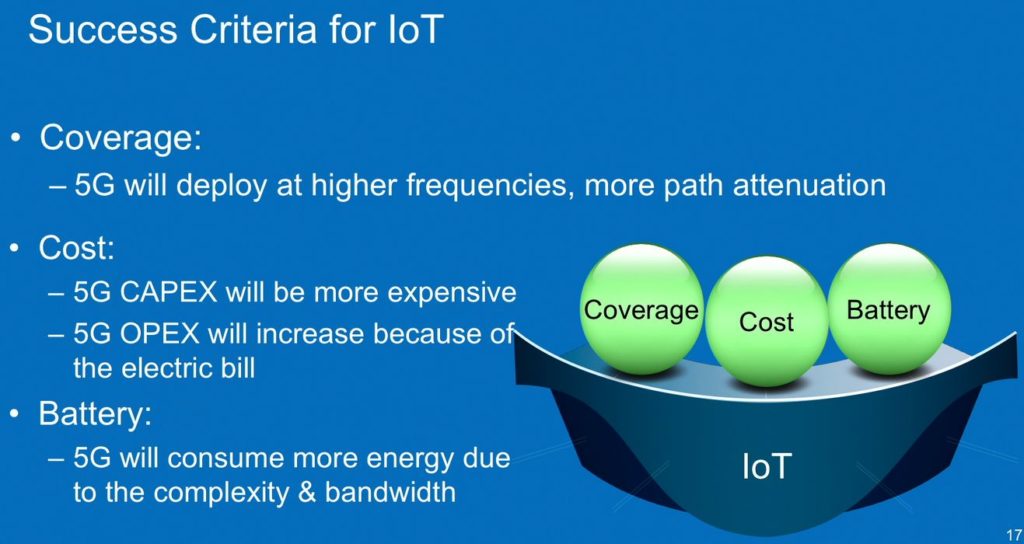 Cost and battery life, according to Bi, might be destined to make IoT use of 5G impractical. With regards to cost, Bi noted 5G’s increase capital expenditures (CAPEX) because of the additional sets of hardware plus the cost of power needed to run them could make IoT too expensive. Finally, 5G mmWave equipment needs more power than equipment for frequencies below 6 GHz. “If you already carry a spare battery in your pocket,” she said, “you’ll need more of them.” Thus, 5G could reduce battery life, also making it infeasible for IoT devices. Bi didn’t mention how 5G’s greater cooling needs will result in lost energy due to heat. 5GTW will look at 5G’s heating and cooling problems in a future article.

How will 5G open opportunities for optical communications? That will come because 5G will need front haul, mid-haul, and back-haul equipment. In LTE networks the network hardware between the radio and the core network is essentially a single baseband unit (BBU). In Figure 4, 5G divides the BBU into a control unit (CU), distribution unit (DU), and radio unit (RU). Breaking the functions into three units gives network operators more flexibility in configuring networks for different applications. Figure 4. Where once there was only back haul. There is now front haul and mid-haul. Image: OFC Conference

Bi concluded by stating that 5G is stimulating growth in fiber optics. He also claimed that “Small chipmakers are gone,” and that only large chipmakers that can scale up to meet the high-volume demand will survive. There are many startups developing 5G ICs. Will they be acquired or pushed out?