TDK Corporation expands its Micronas Dual-Die Hall-effect sensor portfolio with the HAR 379x sensors for multidimensional magnetic field measurements in safety-critical automotive applications according to ISO 26262 rules and in industrial applications. The new sensors come with a digital output: besides pulse-width modulation (PWM) output, the SENT protocol according to the latest generation of SAEJ2716 (rev. 4) is also supported. HAR 379x is the Dual-Die SMD package version of the HAC 37xy family using the proprietary Micronas 3D HAL® technology for detecting angles in a range between 0° and 360° (end-of-shaft and through-shaft setup) as well as linear movement or position. Samples will be available from July 2018. Start of production is planned for the first quarter of 2019.

The HAR 379x sensors’ versatile programming characteristics and its high accuracy make the HAR 379x the perfect system solution for gear selector applications – especially because of the possibility to provide the magnetic field amplitude in combination with the angle information. Both parameters are made available via the fast channel of the SENT interface. Additionally, the magnetic field amplitude information enables the required push-functionality. The device fits perfectly into applications where linear movements have to be measured, e.g. in dual-clutch transmission applications, for clutch pedal position detection, as engine stroke sensor, for transmission position measurement, or for cylinder and valve position sensing.

Each HAR 379x sensor contains two dies operating fully independently. The two dies are placed upon each other in a way that they are still mechanically separated and electrically insulated from one another. Both sensitive elements are very close to each other thanks to the selected advanced assembly technology. The advantage is that the two Hall elements measure almost the same magnetic field, therefore ensuring synchronous output signals. Redundant sensor solutions in a single package reduce system costs while at the same time increasing the reliability of the system due to smaller PCBs and less solder joints.
The HAR 379x is available in a very small eight-pin SOIC8 package.

Conventional planar Hall technology is only sensitive to the magnetic field orthogonal to the chip surface. By developing its 3D HAL® technology, Micronas enabled the integration of vertical Hall plates into the standard CMOS process. Thus, evaluating the relative strength out of the horizontal and vertical magnetic field components became feasible – the key for excellent angular performance. HAR 379x are dual-die integrated circuits with full redundant signals. Each sensor includes a so-called pixel cell, consisting of two vertical (BX, BY) and one horizontal (BZ) Hall plate with spinning current offset compensation for detection of X, Y or Z magnetic field components at one point. Magnetic field lines in parallel to the sensor surface are detected by the vertical Hall elements, whereas the component perpendicular to the chip surface is captured by the horizontal Hall element. HAR 379x sensors allow temperature-stable position measurements with high accuracy at reduced system cost. Furthermore, each sensor includes a signal processor for calculation and signal conditioning of two magnetic field components, protection devices, PWM and SAEJ2716 SENT output. 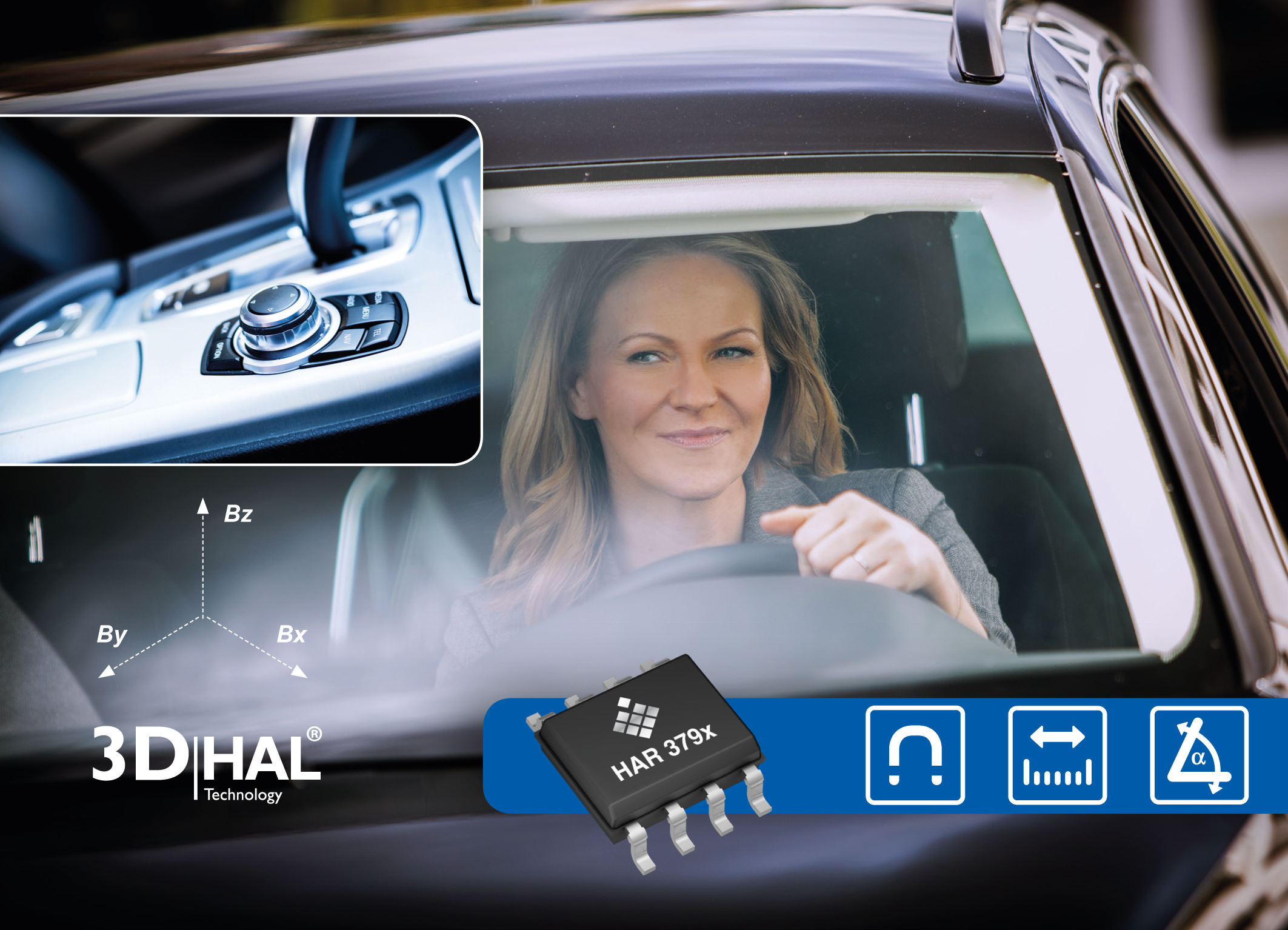