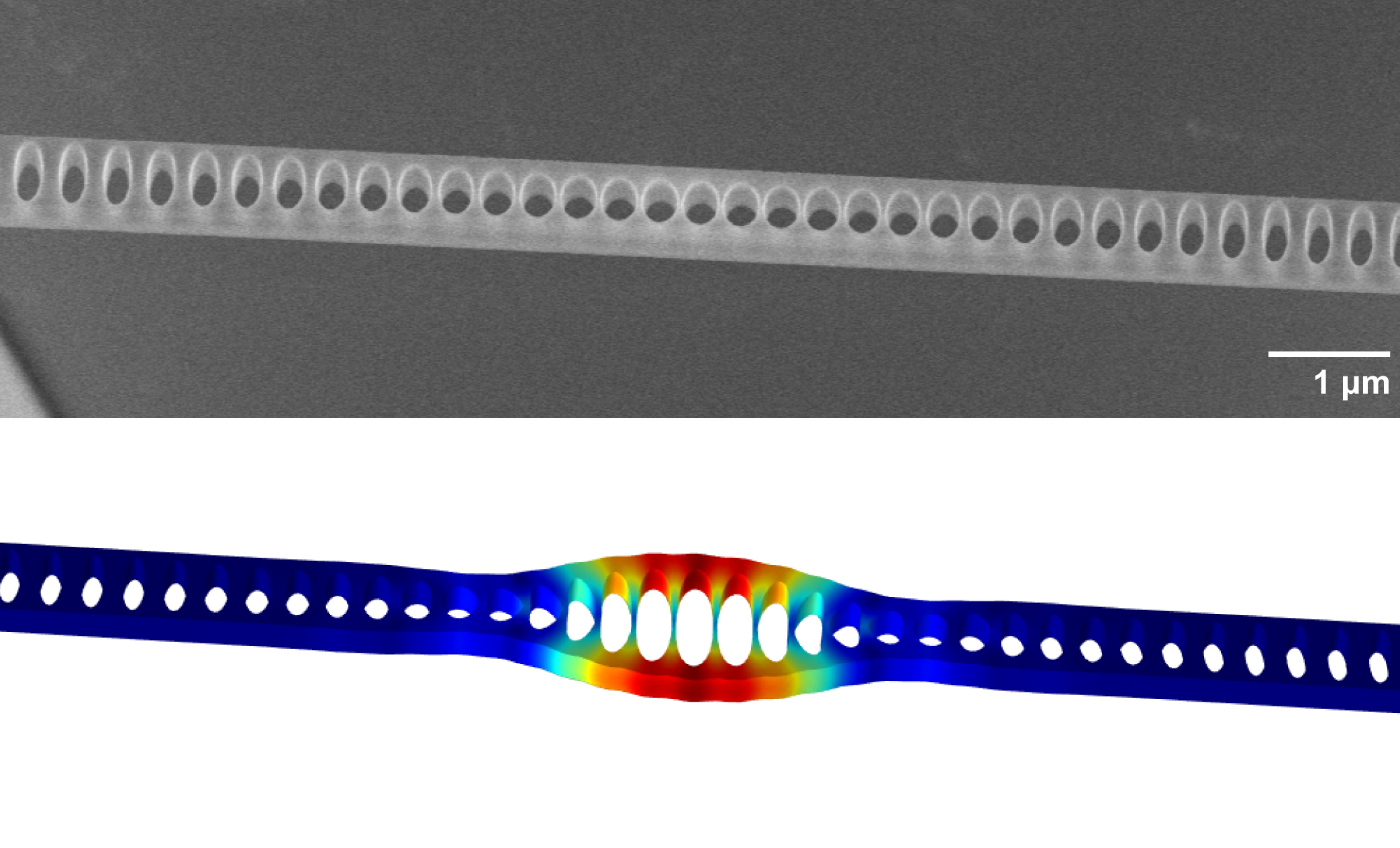 At top is an electron micrograph of the silicon nitride beam. The bottom shows how the beam deforms as it vibrates (length scale greatly exaggerated) with the red regions showing the most deformation, and the blue regions not moving at all. Over one vibrational period the center of beam goes from being stretched out as shown, to being compressed inward, and then back. Source: National Institute of Standards and Technology

Better thermometers might be possible as a result of a discovery at the National Institute of Standards and Technology (NIST), where physicists have found a way to calibrate temperature measurements by monitoring the tiny motions of a nanomechanical system that are governed by the often counterintuitive rules of quantum mechanics.

While the method is not yet ready for commercialization, it reveals how an object’s thermal energy—its heat—can be determined precisely by observing its physical properties at the quantum scale. While the initial demonstration has an absolute accuracy only within a few percentage points, the NIST approach works over a wide temperature range encompassing cryogenic and room temperatures. It is also accomplished with a small, nanofabricated photonic device, which opens up possible applications that are not practical with conventional temperature standards.

The NIST team’s approach arose from their efforts to observe the vibrations of a small transparent beam of silicon nitride using laser light. Thermal energy—often expressed as temperature—makes all objects vibrate; the warmer the object, the more pronounced the vibrations, though they are still on the order of just a picometer (trillionths of a meter) in size for the beam at room temperature. To observe these tiny perturbations, the team carved a small reflective cavity into the beam. When they shone a laser through the crystal, the light reflecting from the cavity experienced slight shifts in color or frequency due to the beam’s temperature-induced vibrations, making the light’s color change noticeably in time with the movement.

But these were not the only vibrations the team members could see. The team also spotted the much more subtle vibrations that all objects possess due to a quantum-mechanical property called zero-point motion: Even at its lowest possible energy, the beam vibrates ever so slightly due to the inherent uncertainty at the heart of quantum mechanics. This motion is independent of temperature, and has a well-known amplitude fundamentally dictated by quantum mechanics. By comparing the relative size of the thermal vibration to the quantum motion, the absolute temperature can be determined.

These intrinsic quantum fluctuations are thousands of times fainter and ordinarily get lost in the noise of the thermal energy-induced vibrations typical of ordinary temperatures, but the process of measuring the beam provides a method to distinguish quantum and thermal fluctuations. When photons from the laser bounce off the sides of the beam, they give it slight kicks, inducing correlations that make the quantum motion more pronounced.

“Our technique allowed us to tease the quantum signals out from under the much larger thermal noise,” says the team’s Tom Purdy, a physicist at NIST’s Physical Measurement Laboratory and at the Joint Quantum Institute. “Now we can directly connect temperature to the quantum mechanical fluctuations of a particle. It sets the stage for a new approach to primary thermometry.”

The power of this new method, when fully developed, will come when the beam is paired with other much more sensitive on-chip photonic thermometers also under development at NIST. Such devices offer the relative temperature sensitivity demanded by applications in pharmaceutical manufacturing, other high performance industrial applications, and climate monitoring, but require absolute calibration, and may drift over time. This new quantum thermometer will act as an integrated temperature standard, ready to keep the other thermometer on track over long periods of time.

Purdy will present the team’s results on March 16, 2016, at the American Physical Society March Meeting in Baltimore, Md.