It can be tough for engineers to plan IoT systems around services based in the cloud. New generations of development systems simplify the task. All indications are that after a long-protracted period of discourse and speculation, 2017 is going to be the year when the Internet of Things (IoT) finally begins to see serious traction. Industry research firm IHS predicted in January that there will be a 15% ramp up in the number of connected devices by the end of the year, resulting in the total number reaching 20 billion.

From a fairly early stage, it has been evident to semiconductor manufacturers what IoT implementations were going to need to be effective. The number of IoT nodes is certain to be measured in tens of billions, and in many cases the applications involved will be relatively cost-sensitive. So the bill-of-materials associated with each node clearly must be a fundamental consideration.

The power drawn by each node also must be factored in because a large number of IoT nodes will go into remote locations lacking power lines. Battery-powered operation will therefore be the only viable option. Thus it will be critical to extend battery life for as long as possible (to avoid the time and cost of sending engineers out into the field to replace battery cells). Depending on the application, other factors such as space constraints, harsh application environments, and so forth, could affect the design of the IoT nodes.

A variety of communication protocols are destined to be employed within IoT deployments – both wireless and wireline. Some are firmly established, while some are still emerging. Among the wireline protocols will be power-line communications (PLC), power-over-ethernet (PoL), KNX and CAN for both industrial and building automation.

Most wireless communication protocols will focus on short-range, ultra-low power operation. Examples include Thread, zigbee, and Bluetooth Low Energy (BLE). Other wireless options include Low-Power Wide-Area Network (LPWAN) protocols, which cover long ranges, and low data volumes while dissipating little power (such as SIGFOX). As an alternative to the low-power protocols, there will also be cellular-based protocols for higher performance wide area network (WAN) coverage – such as LTE-M, NarrowBand IoT (NB-IoT) and in a few years’ time, 5G.

Sensors/actuators are what will make IoT work. All the data can be captured and subsequently analyzed through sensors. Conversely, actuators can be used to drive motors, initiate lighting, etc. Here are a couple of examples where the combination of sensors and actuators (along with the supporting connectivity) will be of real value.

In a home/building automation application, a network of passive infrared (PIR) detectors can sense the presence of room occupants and LED drivers can accordingly activate the lighting. An industrial application, such as a large-scale horticultural site, can employ several different sensors to monitor the ambient light, temperature, humidity, soil moisture, and so forth.

The system can activate when certain parameters are not within the accepted pre-set thresholds. For instance, if the temperature was too high and had to be regulated, motors could open the greenhouse windows. Alternatively, were light levels not optimal for crop yields, connected LED drivers could make adjustments.

The combination of space, cost and power budget restraints all force IoT nodes to follow streamlined design concepts, with no provision for extra functions beyond what they can comfortably support. This strategy will call for use of microprocessor and memory ICs that are budget priced, don’t consume much power or take up excessive board real estate.

Therefore, nodes will use cloud-based services (where data can be processed and subsequently analysed) to make up for the limited functions available at individual nodes. The ability to use relevant apps via the cloud will free IoT system designs from node limitations and allow full use of the valuable data that has been captured.

To date, electronics hardware vendors and cloud service providers have tackled IoT development in almost total isolation of one another. Both parties have stayed within the boundaries of their own core competencies.

This practice has, however, limited the proliferation of IoT — the thought of combining hardware and cloud software development has understandably been off-putting. Hardware engineers don’t want to move outside their comfort zone and face the difficulties of writing large amounts of code. Likewise, software developers don’t want to be confined by a development platform that won’t give them enough room to maneuver.

IoT implementations have several concerns. At the node level, the primary concern will be making operations as efficient and reliable as possible – so data captured by sensors can be passed back for analysis/manipulation, or actuators can be initiated when needed. The connectivity employed must be optimized for the task at hand. Moving further back through the system, the focus will be on ensuring effective interaction with the cloud.

The IoT sector has been in real need of technology that simultaneously addresses the disparate elements involved. Engineers need the connectivity, sensor and actuator functions to create IoT nodes that match application requirements. Software developers need a foundation upon which they can build the cloud-based apps that support the hardware.

To date, companies providing development platform software don’t really deal with all the issues discussed here. Hardware offerings are basically single-board solutions that incorporate certain sensor and communication functions. They provide little scope when it comes to matching application requirements. For example, the platform might not support the best connectivity or sensing option, so compromises must be made. What’s called for is more flexibility in the options for supporting typical IoT functions.

Schematic showing hardware and software elements of ON Semiconductor’s IDK.

The dynamics that are defining IoT deployment have given rise to a new type of IoT development platform – one of merit to both hardware engineers and software developers and which factors in their respective aptitudes. The result of this endeavor is the ON Semiconductor IoT Development Kit (IDK). Rather than taking a one-size-fits-all approach, the IDK is modular, meaning there is a far greater choice of options for sensors, actuators and connectivity. It presents engineers with a versatile out-of-the-box development resource which, as well as taking care of the hardware, also incorporates a sophisticated software framework upon which device-to-cloud IoT applications can be built. 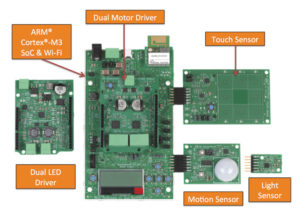 The IDK is based on the sophisticated NCS36510 system-on-chip (SoC) which has a 32-bit ARM Cortex-M3 processor core and two banks of 320KB flash memory. An extensive range of daughter cards can be attached directly to the baseboard. For connectivity, engineers can pick daughter cards for various wireless and wireline communication protocols such as Thread, zigbee, SIGFOX, CAN, Ethernet, and so forth. For sensors, there are daughter cards that incorporate temperature, motion, moisture, heart rate, ambient light, pressure and bio sensors. In addition, stepper or brushless motor drivers, as well as LED drivers, can be added.

Availability of different sensor, actuator and communication functions through a collection of daughter cards lets engineers mix-and-match options to optimize system designs. It addition, hardware engineers, who often lack a good grasp of cloud-based software development, have a simple route to the cloud-based services for their IoT systems. Conversely, software developers have ample opportunity to develop their own proprietary services if they choose to.

The IDK is backed up by an Eclipse-based integrated development environment (IDE). This comprises a C++ compiler, debugger and code editor, along with an array of application-related libraries. Access to a versatile, configurable platform, such as the IDK, will let engineers hit their design objectives without having to make trade-offs or moving outside their area of expertise. These kinds of development systems will be pivotal in taking a large proportion of IoT systems from the concept phase through to actual deployment.
RESOURCES
ON Semiconductor, www.Onsemi.com